Jen and I have had a very refreshing week’s holiday in Northumberland after Easter, doing some good walks and meeting up with friends.

We did two walks in the Cheviots, a range of hills that spans the Scottish border. Compared to the more familiar Lake District fells, the Cheviot hills are much more remote with fewer crowds; the higher levels are windswept and treeless, with rounded tops that somehow look bleaker. Our first walk was an enjoyable trek up Windy Gyl – which lived up to its name – from Upper Coquetdale. The second was to The Cheviot – at 810m one of the highest mountains outside of the Lakes. This has a large plateau at the top, so that there are no views of surrounding hills from the summit trig point. 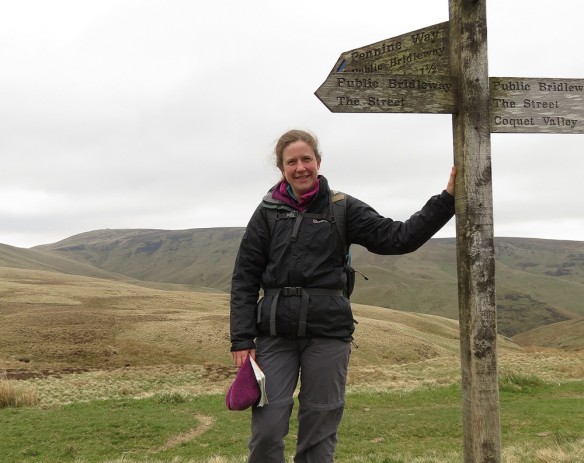 Jen modelling a signpost on the Pennine Way, with the upper sign pointing us to Windy Gyl.

View of Windy Gyl as we descended towards Upper Coquetdale. 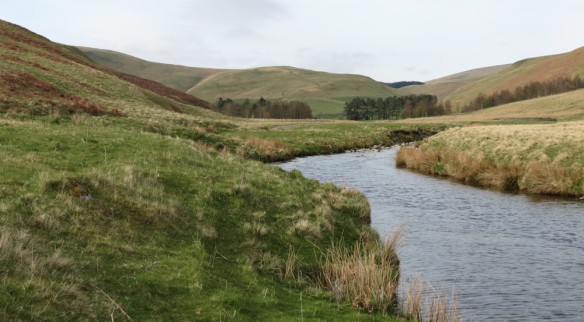 We were also able to meet up with a number of friends. On the Wednesday we visited Jaybee and his wife Jane in South Hetton; Jaybee’s mobility now limits his wildlife photography, but he’s still managed to become a specialist on hoverflies. The next evening we went to dinner with Satomi Miwa at an excellent Turkish restaurant in Longbenton, who told us about her ministry amongst international students at Jesmond Parish Church.

On Saturday evening we arrived, late and smelly after a long walk up the Cheviot, at Ann and Arthur Pratt’s house. They understood our plight immediately and gave us towels and showed us to the showers! They gave us an excellent meal, and told us about their lives as medics and also about their church in Prudhoe. 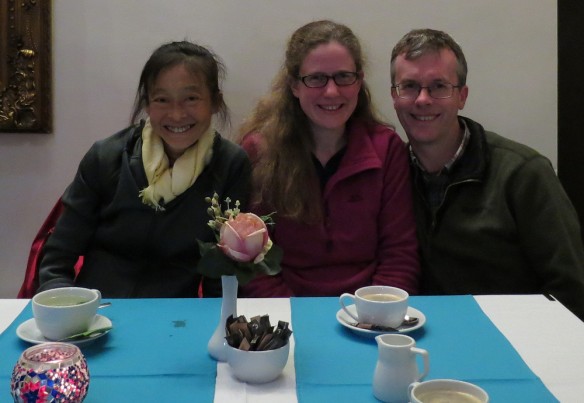 With Satomi at the Lezzet Turkish restaurant in Longbenton

I managed to survive without going on a birdwatching trip, but there were still some great photographic opportunities! We spent a day at the National Trust’s Wallington estate, which had a lovely river walk winding round one side of the site. There was a very showy dipper on the river, which performed lots of characteristic antics, like dipping at the knees and running underwater.

Dipper on the river at Wallington, with a beakful of insects and other prey.

There were lots of red grouse when we walked to The Cheviot, with one in particular showing great patience in allowing me to bend down to get a better angle on a photograph before flying off.

One of the major highlights of the week was on the Sunday morning, when we dropped into Stockton Parish Church, where I’d done my placement from college in 2010-11. The church has grown dramatically in the years after I left, with the congregation roughly double the size, with many from refugee communities. We had a very good chat with Alan Farish, who was the vicar when I was there, and has since handed over the reins to his curate, Mark Miller (who had been at Cranmer in the year below me). I was also delighted to be able to catch up with those who’d been part of the ministry at the Community Church, such as Jon and Sarah Searle, Adam Walsh, Rob and Kath Bailey. Being part of this team was hugely formative for me – and, with hindsight, appears to have been for everyone else involved as well!

One of the highlights of the summer was dropping in to see Jaybee (aka John Bridges) on my way up to Scotland. His inspiration, shortly after my arrival in Durham in 2009, was a key factor in my choosing to develop bird-watching and wildlife photography.

While there, we visited on a short section of disused railway track, on the eastern side of South Hetton. I was keen to see it because it had a key part to play in Jaybee’s life. As he puts it on his website,

I was advised, because of health issues regarding a blocked artery in my left leg, to walk everyday or risk losing the leg which, to be honest, I quite like attached to the rest of my body. Having to walk on a daily basis meant I needed motivation, so in 2004, at the age of 55 I took up photography again after many, many years away from the hobby.

Over the first year, his daily walk was up and down the 100yds of this track – photographing all the wildlife. The result is a marvellously-produced book, which can be downloaded as a zipped PDF file from here.

The old railway track on the east side of South Hetton

It’s eye-opening to see just how much wildlife there is in a short stretch of old railway: many species of dragonfiles, beetles and butterflies; grasshoppers, wasps and spiders; plenty of flowers, grasses and fungi, a wide variety of birds such as whitethroats, linnets and kestrels, not to mention snails, water crickets and frogs! The book really ought to be published for both conservational and educational purposes.

As if to prove the point about the abundant wildlife along the old railway track, this reed warbler was very showy.

Jaybee (left), with Jimmy Wagner whom we bumped into while there.

At the end of the book there’s some useful advice for budding photographers, including this gem:

Make sure all your pockets are zipped up to prevent anything falling from them and into the pond – could that be the voice of experience?

From there we went down to the RSPB’s reserve at Saltholme. Although August is usually not a great month for bird-watching, we had some luck as there was a white-winged black tern flying around – much the most eye-catching tern that I’ve seen! 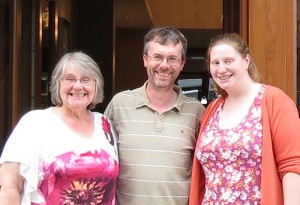 Me with Christine & Elizabeth Shearer

As might be imagined Jaybee and I also had a good natter during the day – he always has an interesting perspective which provokes a good discussion!

After visiting Jaybee, I caught up with Elizabeth & Christine Shearer in Stockton. Getting to know the Shearer family was another highlight from my time in Durham, and I thoroughly enjoyed catching up with them over a Chinese meal.

Visiting Lloyd and Margaret Williams in Dewsbury with Tom Hiney

I’ve just come back from a trip up north, starting with visiting Tom Hiney in Dewsbury, going via the seals on Tees-side and ending up watching red squirrels in Strathyre (the next blog post).

While in Dewsbury, Tom and I visited Lloyd and Margaret Williams: Lloyd has been a major figure in the healing ministry, if somewhat less well known than his contemporaries David Watson and John Wimber. It was a great opportunity for us to quiz someone with a proven track record in this area, with tricky issues such as “Are there times when it is better to pray for someone to pass away into the Lord’s care rather than to pray for their healing?” (Short answer: yes.)

I then travelled up to the north east, dropping into Stockton before meeting Jaybee for a day of bird-watching on Tees-side. We spent most of the time in the Greatham Creek area: I enjoyed being able to see birds that hardly ever occur in the West Midlands! Two notable examples were the common scoter, a sea duck, and the red-breasted merganser, a notably colourful bird with a punk hairstyle.

It was great to be able to catch up with Jaybee. It was meeting him in the first week of my time in Durham, and his showing me around the main birdwatching sites on Tees-side a few weeks later, that led to my taking up birdwatching in a big way. He’s a courageous character, absolutely determined to overcome the ill health that he battles with, and of which he is eager to be completely free.

I’ve always been fascinated by Greatham Creek with its combination of wildlife and heavy industry. This scene, with avocets skimming the water in the foreground, epitomises it.

Heavy industry on Tees-side, with avocets skimming the water in the foreground.

Just over the road – which is the main route from Middlesbrough to Hartlepool – is the haul-out point for the seals (just visible in the image below). 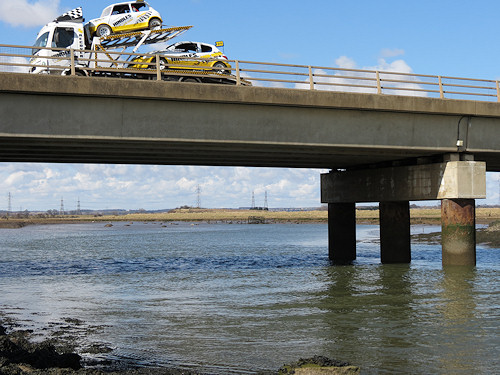 The A178 road bridge at Greatham Creek, with the seals languishing on the mudflats beyond. 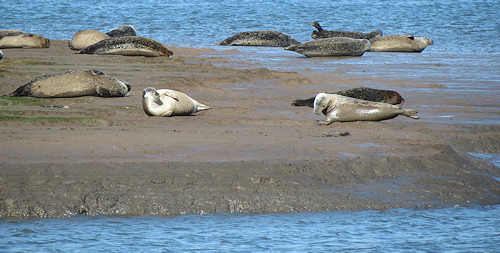 The seals at Greatham Creek

Spot the male redshank unsure what to do when a female flies in… “if in doubt, keep yapping”

I was also amused by the antics of a male redshank, who made quite a racket in an attempt to attract a female. One flew in – which seemed to astonish him, as he was silent for a while, not sure what to do. Then he continued his racket, so that she eventually flew off. Some blokes just seem to lack a bit of panache! 🙂

The biggest highlight of my time in Durham has been my placement at Stockton Parish Church. It has been a huge privilege to be able to serve in a place where God is so evidently at work. Unlike large churches down south which are often well resourced (technologically and otherwise), and where the emphasis may often be on slick production for congregations that have high expectations, at Stockton everything is much more relaxed and informal, and the most overt need is for fellowship and community. This is particularly evident on Thursday evenings, where there is also a dependance on the Holy Spirit, and a recognition that God can and does intervene supernaturally. Below are a few photos from a couple of Sundays ago. 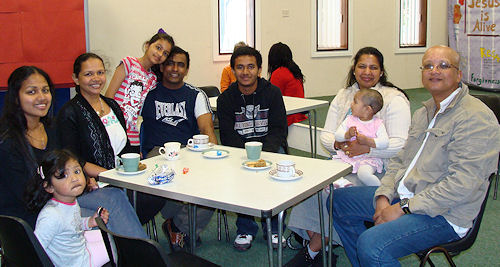 There are a number of asylum seekers here, including these two families from Sri Lanka

There was a Cranmer Hall day out to Lindisfarne on Wednesday. When we arrived, about half a dozen of us assembled and headed off towards the north coast. We found a lovely unspoilt bay fringed by sand dunes and steep cliffs, so for a couple of hours we lounged on one of the dunes. In the distance, seals called to each other as they lay around on mudflats. Eider ducks rested on the rocky outcrops, while in the distance little groups of gannets headed intently passed. Gulls and a couple of fulmars drifted around. We chatted, mused and occasionally gazed seawards. Afterwards we found ourselves saying to each other what an amazingly enjoyable afternoon it had been – an unplanned but fitting finale to time at Cranmer. 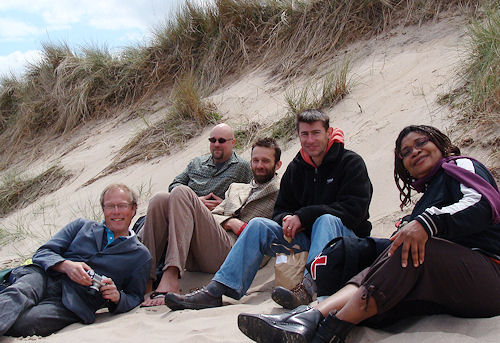 Notes from the river bank
Blog at WordPress.com.